25 Things I’d Tell My Middle-School Self

Like most people, the person I was in middle school is very different from the person I became. I was never a very confident girl. I was obsessed (and disappointed) with the way I looked, tried hard to fit in and spent a lot of time alone.

Now, I’m not obsessed with my looks, I don’t care about fitting in, and while I actually enjoy being alone now, I am a lot more social. So much can happen as you grow up and figure yourself out. But, I often think about the time I wasted as a child being sad about who I was because I didn’t know how awesome I was going to become.

So, since my 25th birthday was last week, I decided to write a post to middle school me about what she should know. I obviously can’t change anything, but maybe there’s someone reading this who needs to hear it too. 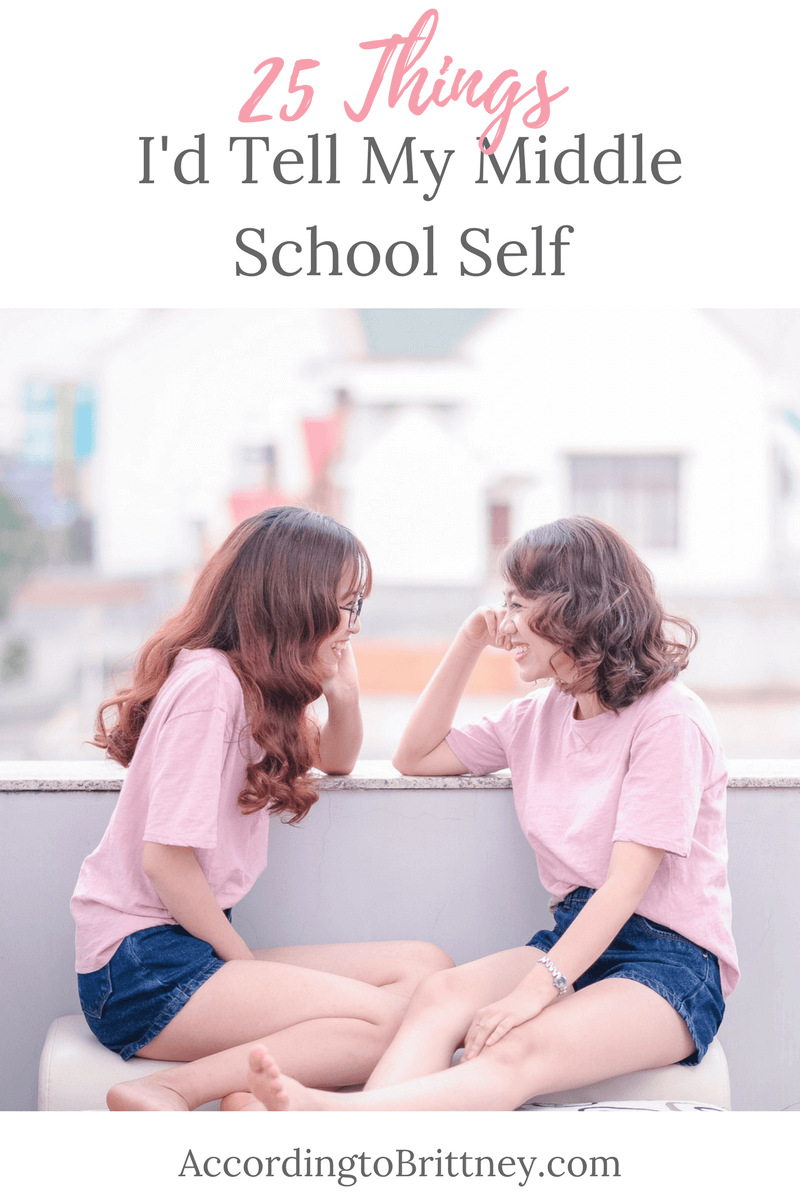 Younger Britt, you spent so much time being sad about your appearance, comparing yourself to others, and trying to look better that you didn’t see the beauty that was right in front of you. You are, and always will be, a beautiful girl.

2) Other people’s opinions of you don’t matter

You used to get so bent out of shape when people made fun of you which is understandable. But, those people in school, don’t matter to your life at all. Many of them were insecure themselves which is why making fun of you was great to them.

Your insecurity about not having a boyfriend was so out of this world, but I know you wanted to fit in. You will meet the best guy for you sooner than you think. Yes, the one you always talked about having. (Also, most of the guys you had crushes on are losers, so be happy that they weren’t your boyfriend.)

I know that you already this, but there was a time when you thought you were too smart. You have no idea how what you learned while spending all that time alone would impact your adult life. Those passions that you were a little embarrassed of are definitely paying off now.

5) You were never meant to fit in

This lesson will come to you soon, but trying to be like everyone else was your biggest goal. There is a reason why you never fit in with those around you, dear. You’re different, destined for greatness, and meant for more than the ordinary. You’re extraordinary.

I know you thought that you were the only one, but you’re not. Others were insecure about their looks and plenty of other things. But, your flaws make you who you are.

7) You Had a Great Family

Most middle-schoolers think their family is the worst, but you were so lucky to get a mom who gave you everything. You truly had a great childhood which lead to an amazing adulthood.

I know when you were sad, it felt like that was your permanent hell. But, nothing lasts forever. Appreciate the good times and remember that the bad times disappear with the blink of an eye.

9) You’re always going to be “figuring it out”

You have plenty of time to figure life and who you are. Trust me, you will be trying to figure it out well into adulthood. But, that’s okay because so if everyone else.

There were so many things about yourself that you wanted to rid yourself of to make you better. But, guess what? Most of that stuff is what makes you a cool adult! (I may be a little bias)

11) The person you are matters more than anything

I keep circling back to appearance because it was SUCH a big deal for young Brittney. You were an amazing friend, fun, smart, talented and so many other things. That’s what people remember about you.

12) The people you thought were cool, weren’t

I know this is shocking, but as previously stated, the boys and, even girls, you thought were cool. Were, in fact, not cool. Plus, they are really not cool now. And you? Totally cool. Trust me!

13) Having the latest stuff is irrelevant

Not getting into the latest fashion trends, getting the best cell phone or laptop is something that will happen your whole life. As you get older, you will see that no remembers what you were wearing or what cell phone you had.

14) You are loved and lovable

To think that you aren’t lovable is crazy, you just weren’t seeing who really loved you. The people who didn’t care for you were missing out. Not the other way around.

This is something I’m still learning today as an entrepreneur. Everyone is different, on different paths, and have different lives. You are on your own special path. That’s where your focus needs to be.

This time of your life may seem like whatever, but it’s not. You accomplished a lot at this young age. You were doing well in school, wasn’t involved in a lot of the nonsense and despite being made fun of and having low self-esteem, you flourished.

We lose so many amazing people due to bullying. You never let it stop you. Sure, it was hard and made a big impact on your life. But, you always strive to be better than give up.

As I’m writing this, there are just a few moments that really stick out to me. A lot of the stuff that really got you down won’t even be in your memory as you get older.

20) What you do remember fuels you

You may think that what people are saying about you will only hurt you. But, there will be a time when you remember that crap and see how you proved everyone wrong. You may recall “Back then, they didn’t want me. Now, I’m hot, they all on me.”

21) This is not the worst time of your life

You’ve referred to middle school as the worst time of your life for a while. But, we both know that isn’t true. You’ve faced far worse and will continue to for the rest of your life. But, you will also find some of the best times.

22) Your granny is looking down on you

We both need to hear this. Losing granny was a terrible time and definitely the worst. But, she is forever looking down on us with immense pride. You are a part of her, so there is no way that you can’t be awesome.

You think I’m crazy for saying it, but there is a lot now that you’re going to miss. Spending all night playing the Sims, school being your only responsibility, doing fun stuff as a family all the time. It doesn’t last forever, so try to cherish the good moments.

High school, college, life after college! It’s hard to see the future when you’re so stuck in the present. But, you have a lifetime full of adventures ahead. We both do!

25) You are a powerful force of light

No one ever told you this, but trust me. You are so much more than you think you are. You’re an inspiration, you’re a light and fire and sunshine. You are going to impact this world like no other. You don’t see it now, but you will.

Wish you could talk to younger you? What would you say to yourself? Comment below!